There are 5 traits that control the basic color of all rabbits.  They are referred to as the A-, B-, C-, D-, and E- series genes.  A is for agouti, and controls the pattern of color on the hairs.  B is for black/brown.  C is for colored, and essentially controls how much color is on the rabbit (full color, shaded, pointed, white).  D is for dense/dilute.  E is for extension, and controls the extension of color on the hair.
It is easiest to explain the colors out of alphabetic order.  I suggest you read about them in B, D, A, E, and C.

At the most basic level, all rabbits are either black (B) or brown (bb).  Black is dominant to brown, so a rabbit that is a brown-based color will never carry for black.  If any pair of rabbits produce brown offspring, BOTH parents MUST carry or be brown.
Keep in mind that some rabbits look brown-ish, but aren't really brown.  The main example of this is the wild-type color, as seen on cottontails.  They appear brown because their hairs are banded with yellow (which can appear to be any color from light cream to bright orange).  In such rabbits that are a kind of mottled color (called agouti), the actual color (black or brown) will be most obvious on the ear tips and base of the tail.  You can also see it if you press their hair together so that the tips of the hairs are touching. 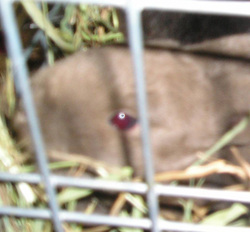 One of the effects of being brown (bb), is that the eyes get a ruby cast to them when seen in the right light.  The picture on the left shows a chocolate Rex kit.  The redness is not from a camera flash.
These are not complete lists, but do include most accepted colors, and some not accepted.

The D-series affects how densely packed the pigments are in the hairs.  Dense (D) colors are darker, and dilute (dd) colors are lighter. Dense is dominant to dilute, so a dilute-colored rabbit will never carry for dense.  If any pair of rabbits produce dilute offspring, BOTH parents MUST carry or be dilute.

A-Series: Agouti, Tan or Self

The A-Series is the first series where there are 3 possibilities, instead of the "normal" one dominant, one recessive set-up that we've seen so far.  Each rabbit can only have two genes, so no matter what, there will be at least one possible that a rabbit does not carry.  The only time you will see litters with all three types will be when an agouti and an otter, both of which carry self, are crossed.
Agouti (A) is the most dominant in the series.  It gives the rabbit a white or cream (depending on modifiers) belly, eye circles and inner ear.  Those areas may or may not have an undercolor (usually pearl to slate gray).  The rest of the hairs will be banded.  That is, when you blow into the coat, you will see distinct rings.  Usually, there are three rings:  the outermost ring color will be determined by the B- and D-series genes, the middle ring will be white to bright orange, and the bottom ring will be white to slate gray.  Sometimes, the outer ring may not be visible.

Tan(at) is recessive to agouti, but dominant to self. Tan rabbits will have a white to cream belly, eye circles, and inner ears, just like agouti, but instead of having banded hairs over the rest of their body, each hair will be one color from root to tip (determined by the B- and D-series). They usually have a line of cream to rust between the colored area and white/cream areas. Some rufus modifiers may extend the rust completely through the white/cream areas, such as with the Tan breed.

Self (aa) is recessive to all other genes in the A-series, so a self rabbit will never carry for tan or agouti.  Any pair of rabbits producing self kits MUST BOTH carry self.  Self rabbits are completely colored all over their body.

The E-series controls the extension of colors on each hair.  In order of dominance, the genes are Steel, Normal, Japanese, Non-extension.

Steel (Es_) is the most dominant gene. It is incompletely dominant to normal coloration. On agouti rabbits, a single copy of the steel gene pulls the tip color down the shaft, and leaves the tip of the hair silver to orange. Two copies of the steel gene make a rabbit look like a self. Also, there is no apparent effect of the steel gene on a true self (aa) rabbit.

Normal (E) is dominant to the rest of the E-series genes.  It is the most common E-series gene to come across.

Japanese (ej) is recessive to normal, but dominant to self. It is responsible for the Harlequins and Tricolor. Essentially, it makes the hairs grow in patches of cream-to-red and the B-/D-series color, creating a checkboard, brindle or patchwork effect.

The C-Series has the most possibilities of any rabbit color genes.  Remember that each rabbit can only have a max of two of the genes.
Full-Colored (C) is the most dominant gene in the series.  It also the most common gene most breeders will come across.

Chinchilla (cchd) is recessive to normal coloration, but dominant to all other C-series genes. The Chinchilla gene turns any yellow (cream to rust) pigments white.

Shaded (cchl) is recessive to normal and chinchilla genes, but incompletely dominant to the other C-series genes. Rabbits which have two copies of the shaded gene will be darker and more evenly colored than rabbits with only one copy of the shaded gene. The shaded gene lightens up the rabbit's color over their back, turning it to a white-cream to sepia brown (depending on whether they have one or two copies and other genes), that shades into a darker color on their flanks, belly and extremities. The color is temperature sensitive, so they will appear lighter-colored during warm seasons, and darker during cold seasons.

Himalayan/Californian/Pointed (ch) is only dominant to white. Some suggest that it is incompletely dominant because pointed rabbits which carry white often have lighter markings. The ch gene makes the rabbit's eyes ruby red (pink iris, red pupil, as with albinos), and turns the body white, leaving color only on the extremities (ears, nose, tail, feet). The color is temperature sensitive, so will be lighter during the summer, and darker during the winter. It is not uncommon for does to end up with spots on their dewlaps and hips from pulling fur, especially during winter. Pointed rabbits will also frequently get eyebrows during winter.

Red-Eyed White (cc) is recessive to every other C-series gene.  A rabbit which is red-eyed white (REW) cannot carry for any other C-series gene.  If any pair of rabbits produces REW offspring, BOTH MUST carry for REW.  The gene acts like a blanket, covering up ALL other pigmentation the rabbit would otherwise have had, leaving it COMPLETELY white.  This is why sometimes you will see many people describe their REWs as "[some color] underneath".  The eyes will always be red.