There are several genes which can modify the patterns of the color on the rabbits.  Most of these are white-spotting genes, which add areas of white to the coat.  The white-spotting genes are: English Spotting (aka Broken), Dutch, and Vienna.  English and Vienna genes are incompletely dominant, where two copies of the gene will result in a rabbit that has considerably more white than a rabbit with only one copy.
A note on red-eyed white rabbits: Because the gene responsible for red-eyed white (REW) masks ALL other colors, it is impossible to tell if a REW has any of these genes unless one of their parents is homozygous for the gene and/or they have produced offspring with these patterns with a mate that does NOT have the gene.  So, if a REW rabbit does not have a homozygous parent (charlie, BEW, etc.), the only way to tell is to breed it to a rabbit that does NOT have the spotting gene in question (solid-colored with no white spotting AT ALL).

The English Spotting or Broken gene creates a more-or-less random pattern of white spots over the entire rabbit.  Usually the spots of white and color have very round edges.
A rabbit which has two copies of the En gene is called a Charlie, and often has very little color.  Charlies can have as little color as just circles around the eyes, but often also have spots of color on the tail-end of their spine, hips, and sometimes a nose spot.   Offspring of Charlies will ALWAYS be broken or Charlie.
Rabbits which only have one copy of the En gene are broken.  Broken rabbits can have as little white as just white feet and bellies, to just leaving color around the eyes, on the ears, and a few spots over the body.  Rabbits which have more than 50% color are often referred to as being booted. 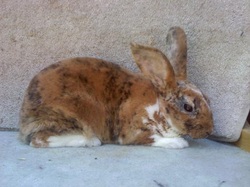 Rabbits which only have one copy of the En gene are broken.  Broken rabbits can have as little white as just white feet and bellies, to just leaving color around the eyes, on the ears, and a few spots over the body.  Rabbits which have more than 50% color are often referred to as being booted (see picture).  Occasionally, rabbits with only one broken gene will have less than 10% color and be referred to as Charlies, even though they are not genetically Charlies.

I have never seen a rabbit that carries for broken which does not have signs of being broken.  They are always at least booted.
Breeding Brokens to solids:  A lot of people have found that breeding brokens to solids will often result in a lot of booted offspring.  Very rarely will you see booted rabbits that do not have a solid parent.  Also, broken kits with a solid parent almost always have a blanket pattern (large patch of color over their back), which is perfectly acceptable in most breeds.  Rabbits that are more spotted than patched (like you'd expect to see for a Dalmatian, or to stick with rabbits, English Spots) are almost always from crossing brokens to brokens.  However, when you breed two brokens, you risk producing Charlies.  You can get spotted (non-blanket) brokens by crossing Charlies or lightly-marked brokens with solids.

When a rabbit has two copies of the Vienna gene, they will be blue-eyed whites (BEWs).  The only exception to this is if the rabbit also has two genes for Red-eyed white (REW), in which case the rabbit will be REW, and can be said to be "BEW underneath").
A rabbit that has one copy of the Vienna gene is called a Vienna-marked (VM) rabbit.  It is not uncommon for these rabbits to have blue or mottled eyes.  They usually also have a triangle of white on their nose (a snip) up to a blaze or full white face.  The other common marking is white toes, which can be as large as their entire saddle (shoulder area).  VMs are often mistaken for Dutch mixes because of these markings.  The eyes are usually the most reliable tell.
Some VMs have no markings and normal eye color.  Remember that if a rabbit has a BEW parent is will ALWAYS be a VM.  Also, if any pair of rabbits produces BEW offspring BOTH MUST be VMs or BEWs.

The Dutch gene causes markings similar to Vienna marks.  That is: white blaze, white saddle/forelegs, white stops (back feet).  The gene is still be investigated by geneticists, with results suggesting that it may be closely linked to the broken gene, and may even consist of up to four possible genes!  Most research indicates that it is a recessive gene, but may be incompletely so.

The Dutch gene is also useful in Hotot and Dwarf Hotot markings.